India never fails to astound with it’s onslaught of sights, sounds, smells, colours and tastes. It is an extremely visceral place as I once again on my twelfth trip discovered. I was in India in March to co-host a retreat with my extraordinary partner in Namaste Retreats India, Veechi Shahi. As always, India offers experience after experience and even a seasoned India traveler like myself, is transported to another world in another time and on what feels like another planet.

Welcome to Rishikesh where it seems that time has stood still. Even though a very old pandit (a Hindu scholar learned in Sanskrit and Hindu philosophy and religion, typically also a practising priest) tells me that he has seen the world change from his small temple on the one side of Laxman Jhula bridge. I imagine that the world has changed a lot for him since Rishikesh was made famous by the Beatles who spent a few months there in 1968. Rishikesh is situated in the Himalayan foothills beside the Ganges River which is considered holy. The city is renowned as a centre for studying yoga, meditation and Ayurveda. Temples and ashrams (places of spiritual study usually centered around a guru) line this alcohol free, vegetarian city of 100,000 and the dominant colour is orange or saffron! The burnt-orange hue of the most expensive spice in the world, is also a sacred colour in Hinduism. It represents fire and the burning away of impurities and is the colour worn by holy men. The town is dotted with the colour orange from the famous Laxman Jhula bridge to the temples to the ascetics and babas who have renounced the world. Wearing saffron symbolises the quest for light. The orange colour is a symbol of the feelings that are conjured in Rishikesh as one settles in to practice meditation, yoga or to simply to enjoy chai and cake on almost every corner.

Watch a video of our last retreat in March which tries to capture the very orange feeling of Rishikesh. 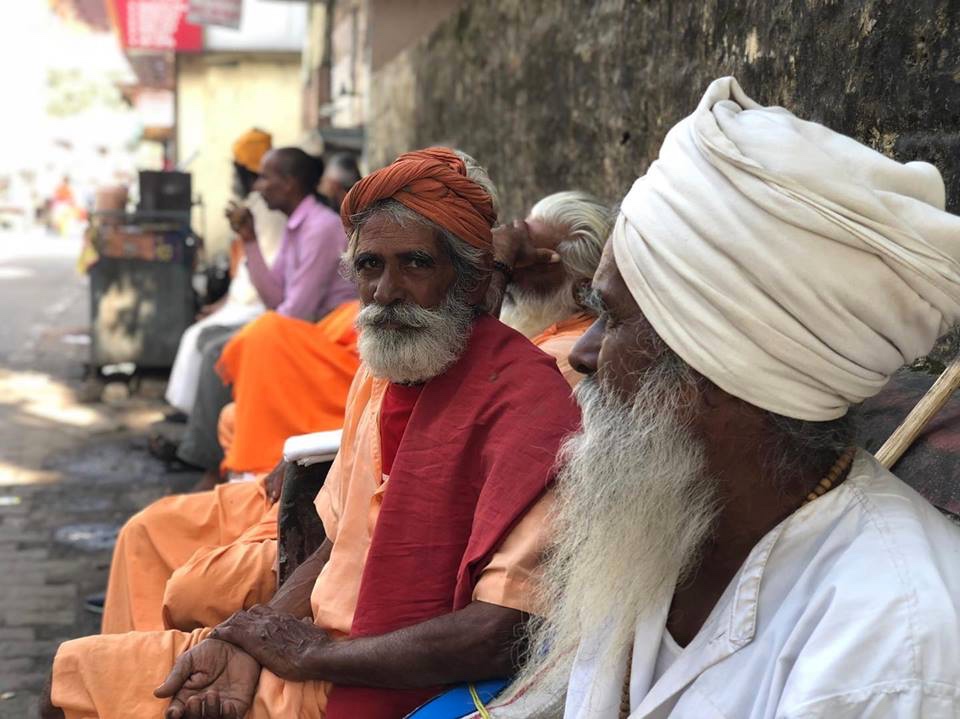 Traveling from Rishikesh in the north of India further north to the actual Himalaya mountains in the Dhauladhar Range by plane to Dharamshala and then onward to McLeodganj by road in what can only be called a shake ride. McLeodganj often called “Little Lhasa” because of its large Tibetan community, has an average elevation of 2082 meters. The Tibetan Government in Exile has its headquarters there. What strikes me when I first arrive is the predominant red colour of the Tibetan monks wearing red robes. And not as expected just men, but women also. There is even a small measure of foreigners, men and women who have renounced their old life in favour of this very peaceful life. And still, Tibet dominates. It is a simple place, very peaceful and ever so beautiful with the great god like mountains looming above.

We stayed in a small hotel just a couple of streets above the actual Dalai Lama’s Monastery where we were witness to men and child monks’ living quarters below. Of course one does not travel all this way and not take a walk down the hill to see the sights and sounds of the locals. Not to be disappointed in the slightest, the Monastery is very welcoming to all who want to visit. It’s a little village really, the road to the entrance swathed in commerce of Tibetans selling their wares and the compound itself having a small vegetarian eatery, a library and a few other shops that were closed when we were there. We were drawn to the sounds of the monks chanting and continued upstairs to the hall. We found a mattress and sat down to imbibe the atmosphere. We had not been seated for very long when a monk offered us a cup of salty yak tea. Listen to a youtube video of Tibetan monks chantings and incantations. y

Having just a couple of days left to play “India India” we race off (well fly off) to Bombay as it’s called by some locals to be collected by a very posh driver who drives us by road about three hours inland into the Western Ghats somewhere between Mumbai and Pune. I’m starting to get over the bumpy nauseating ride when we are deposited in heaven. The Hilton Shillim Estate Retreat and Spa knows how to do luxury and we’ve been travelling hard in India so when we discover that we’ve been given a private free standing villa we are beyond happy. We’re handed a pair of white pyjamas and instructed to wear them throughout the two nights that we’ll be staying. The first thing is to be purified by fire in our own private fire ceremony and next we have our feet ritually washed. all this to symbolise leaving the rest of the world behind in order to rest and purify.

Ayurveda is a 5000 year old healing system that deals with the human as an individual and one of the ways Ayurveda works is to detoxify the body. The method of detoxing is known as Panchakarma and is not only for detoxifying the body, but also for rejuvenation, strengthening the immune system, and restoring balance and well-being. It is one of the most effective modalities in Ayurvedic medicine and is recommended when an individual feels out of balance.